I recently evaluated an optional gymnast who was struggling in the last year with pretty intense high hamstring pain and “tightness” limiting her splits, leaps, sprinting for Yurchenko’s, and inbar skills. As it turned out, I felt her hamstring problem was much more a core control problem and not a true hamstring flexibility problem. By addressing the core issue and integrating it back into split leg patterns, we were able to make some rapid changes in both her flexibility and pain levels without any aggressive passive stretching. Both her father and the gymnast gave me permission to write this case study up and use the pictures, so thanks to them!

Before going on, if you want to learn all my thoughts on hamstring injuries in gymnastics, as well as all other common injuries, be sure to check out my free Gymnastics Medical Care and Rehabilitation E-book If you are a gymnastics professional looking for everything about hamstring and hip flexibility, be sure to download my free Gymnastics Flexibility Guide This gymnast was the 4th gymnast I had worked with this year who had the same hamstring pain and “tightness” that wasn’t getting better despite lots of attention to flexibility work. Last year it was only her right leg, and with rest/activity modification it calmed down. This year is is now on her left, with more pain, and sometimes her right get sore as well. Here is some of her pre-test info, that was also familiar to the other 3 cases. When going through her movement assessments, she had quite a bit of resting anterior pelvic tilt and hyperextended lumbar spine, seeming to rely on her passive stability spinal supports. Resting posture really isn’t the biggest deal to me, it’s more about what someone does during dynamic motion. In her case the same overextended spine position showed up in her dynamic leg raise pattern. She didn’t have much of reversal into a neutral spine position, and said she her left high hamstring pain was reproduced when reaching about 80 degrees (first picture below). Interestingly enough, when I made her pull down a band for some core recruitment during her leg raise her motion improved slightly and she reported significantly less pain (second picture). I bring this up as a very important point. I feel the over extended spinal position, anterior tilt of the pelvis, and lacking anterior core control is the bigger issue here rather than a true hamstring flexibility restriction. This position adds quite a bit of “pre-load” tension the hamstrings, as the origin of the hamstring is the at base of the pelvis. Being in this over extended “pre loaded” hamstring position with the addition of explosive leaping, running, and snapping into pike shapes was likely putting huge stress on her hamstring. Overtime I think this slowly created the injury she was dealing with, as she did thousands of reps between vaulting sprints, jumps, leaps, hurdling, and uneven bar training.

I also think it lead to repetitive tissue strain and a protective guarding of her hamstrings, creating the increased tone. This increased tone most likely manifested as “tightness” being felt during stretching, creating her split and pike stretch to progressively get worse over time. Unfortunately, I actually think that many gymnasts fall into this category and may be making the situation worse by continuing with only aggressive passive flexibility work for pikes or splits. In this scenario pushing themselves, being pushed, using weights or trying do higher overspilts all may cause more harm than good. One of the gymnasts I treated this year was on the border of her hamstring literally pulling of her pelvic growth plate because she was continuing aggressive flexibility work. Sure, some may gymnasts may truly have stiff hamstrings but I bet those are a much smaller percentage compared to this issue. Not to mention, I think there are many other alternatives to approach that tissue extensibility issue.

With this in mind, I had her run through a couple drills, all aimed at trying to get a better spinal position and then move into hamstring loaded movements. My aim was to repattern the spinal control issue during split pelvis movements and give the hamstring a break. I had her do,

1. Very light hamstring foam rolling to temporarily modulate the increased hamstring tone. It was about 45 seconds on each side.

2. Slow bear crawling with block on back to work neutral spinal positions, lumbopelvic dissociation, and breathing. This was a little choppy and you can see she struggles with the spine position, but she’ll get it over time.

Following this we re-tested her toe touch, split, passive leg raise, and running. Her toe touch and split were much improved, and more importantly she noted quite a bit less pain. Now I don’t think she’s winning a flexibility contest just yet, but it was solid progress. Sprinting for her Yurchenko was also less painful initially, and with some cueing to lean forward and maintain depressed ribs her pain went fully away. Her passive straight leg raise had less pain and more motion, although it was still present at end range. Over time I think she will see great results.

Following the re-test I taught her a dowel assisted single leg deadlift. This was to help reinforce the neutral spinal concept, help build the temporary change in hamstring length to a usable pattern, and also start to gently add tension eccentrically though her hamstring.

I told her over a few weeks we would touch base again and see how she felt, and then hopefully we will start to progressively load her single leg deadlifts, lunges, Nortic Hamstring eccentrics, and transfer her exercises to more challenge active hip control drills. This is to theoretically build tissue strength via eccentric load (supported in research to increase sarcomere length and gain flexibility), continue to modulate her pain perception with eccentric movements, and restore her full range of motion into more gymnastics drill based movements. She will also need some more hip extension based strength drills like single leg hip lifts

One important note, I don’t want everyone to take this article and think all passive stretching is going to cause injury hamstrings. That isn’t what I’m suggesting at all. I just want this to serve as another thought process for coaches and healthcare providers to utilize. Our girls do a dynamic warm up daily and also integrate some controlled passive stretching when appropriate. However, I will say I dont crank on my gymnasts, and when we stretch is always followed up by motor control drills and ways to teach their nervous system how to integrate the new motion gained. Hopefully people found this interesting, as I know for me this concept was a big shift in how I address some hip flexibility issues with the girls I coach. Take care,

Our New Warm Up With Video Walk Through (Part 2) 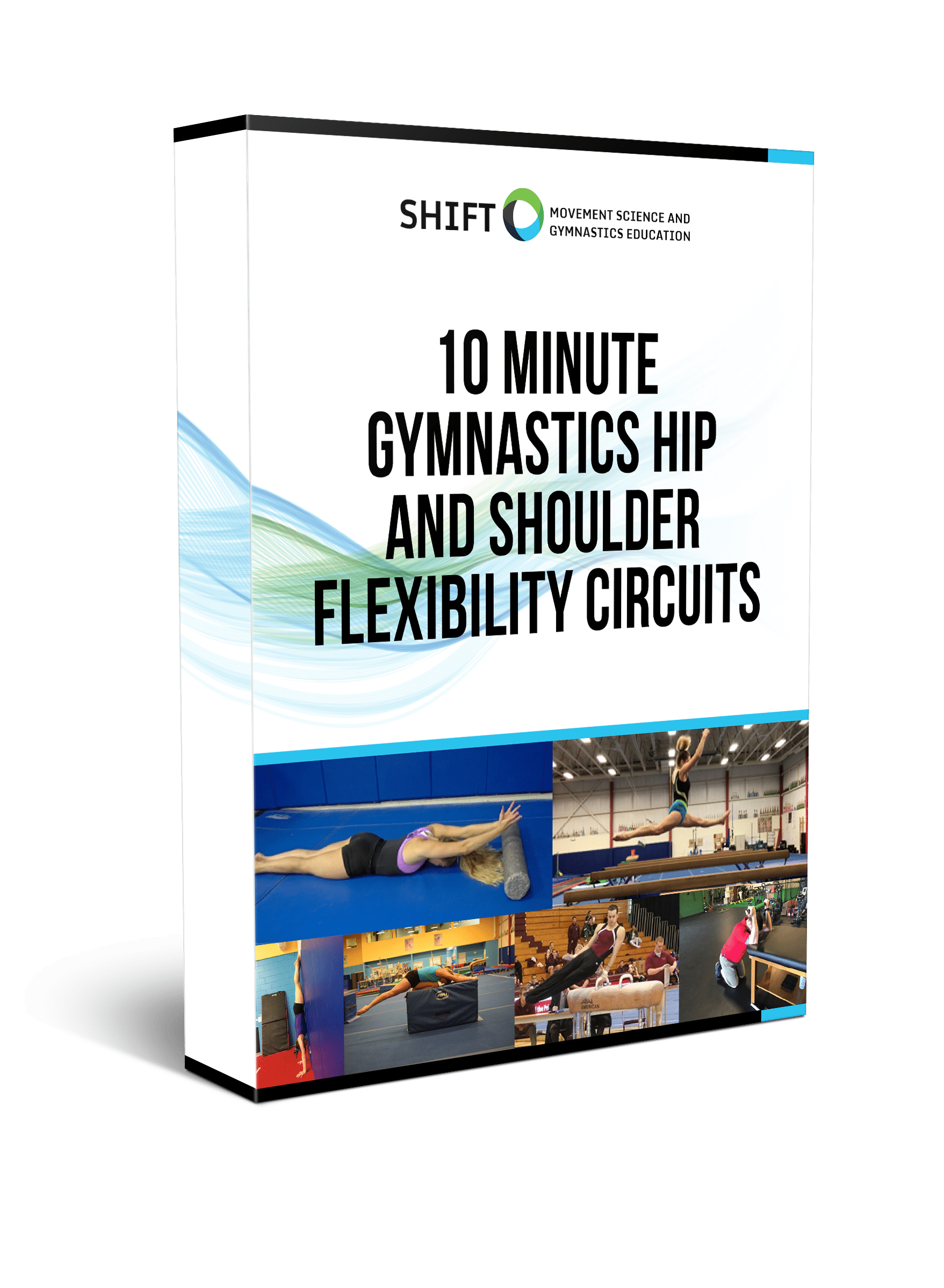 Rehab Tips For Clinicians To Treat Gymnasts with Extension Based LBP –...

Rehab Tips For Clinicians To Treat Gymnasts with Extension Based LBP – Part...
Scroll to top